By Tanisha Heiberg and Promit Mukherjee

Shunned by investors due to mines that are old, deep, and difficult to extract, the country’s gold miners have traded at a discount to their global peers for years.

Higher prices, as spot gold roared past $2,000 an ounce for the first time, coupled with a weaker rand currency, comes as a lifeline.

Interviews with companies executives, analysts and fund managers show that higher gold prices could see some local miners bring their net debt to zero and pay healthy dividends over the next 18 to 24 months.

“Gold mining companies will spew a lot of cash in the next 12 months,” said Franco Lorenzani, an independent mining analyst.

Â Â Â  Sibanye Stillwater, which has battled high debt, said it achieved its leverage target in the first quarter, ahead of plan.

Higher prices have also made more marginal ounces profitable for Sibanye, spokesman James Wellsted told Reuters, adding the company was looking at other ways to benefit from favourable market conditions.

“Maybe mining secondary reefs … might be viable at these prices,” said Wellsted.

Pan African Resources is hoping to be net debt free by June 2021 and plans to increase its dividend payout to 5% from 1% last year, its head of investor relations Hethen Hira said. Its net debt dropped 49% to $62.5 million at end December.

Gold Fields has flagged hefty gains from the gold rally, with half-year profits seen up more than 300%.

Rene Heichreiter of Noah Capital said he was advising his clients to continue to invest in local gold miners, predicting a exponential jump in revenues in the coming months.

Some investors have already turned bullish.

Factsheets of fund managers seen by Reuters show South Africa’s Fairtree increased its exposure to Harmony Gold by 0.78% between March and June, while U.S.-based ASA Ltd, which invests in gold mining companies globally, increased its investments in South Africa to 10.7% in June from 9.9% in January.

But the operating environment remains risky.

While power cuts and regulatory uncertainty have always hung over operations, the mining sector is also battling rising COVID-19 cases in underground mines where social distancing is a challenge.

This could threaten output, as some analysts warn the frenzy over high prices could backfire as investments add to costs.

“Whenever the gold prices go up the costs tend to go up with it,” said Nedbank mining analyst Arnold Van Graan. 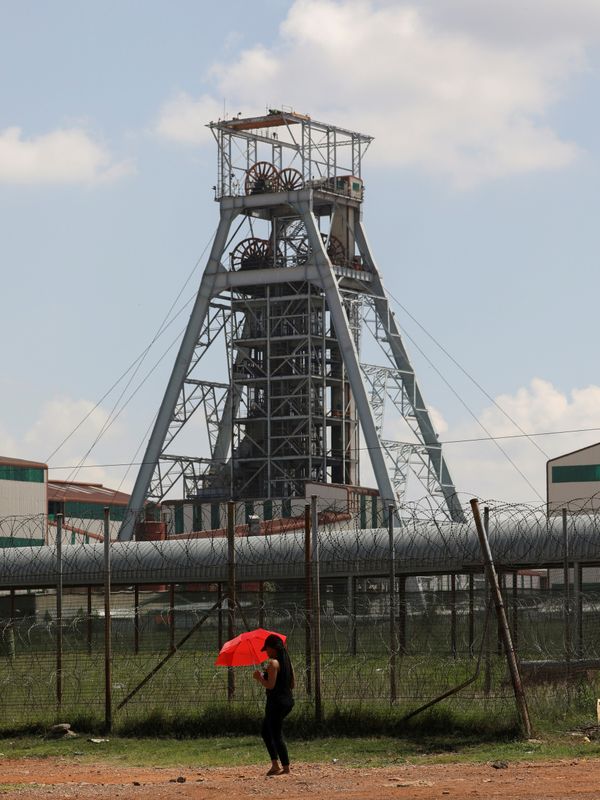 FILE PHOTO: A woman walks past a shaft at Harmony Gold's Doornkop mine, 30km west of Johannesburg