LONDON, July 31 (Reuters) – Glencore expects its trading arm to hit the top end of its operating income target this year, the commodities giant said on Friday, after it took advantage of oil market gyrations caused by the COVID-19 pandemic.

A large trading division makes the Switzerland-based group more resilient than most miners during commodity downturns.

The trading arms of oil majors such as Royal Dutch Shell , Total and Eni have all reported bumper profits by storing oil when prices plunged earlier this year and then selling later at higher prices, profiting from what is known as a contango market structure.

Glencore’s trading, or marketing, division is now expected to deliver operating income at the top end of its $2.2-$3.2 billion target for the year.

“Our Marketing business has … risen to the challenge, delivering robust counter-cyclical earnings,” Chief Executive Ivan Glasenberg said in a statement.

Glencore warned its net debt, which is already the highest among mining peers, would be higher in the first half of the year. In March, it deferred a decision to pay a $2.6 billion dividend until interim results next week. “I suspect the company will be under a degree of pressure to pay dividend given the payouts from Rio Tinto and Anglo American,” said BMO Capital Markets analyst Edward Sterck.

Copper output fell 11% to 588,100 tonnes for the six months to June 30 while cobalt output was down 33% to 14,300 tonnes, owing to the closure of the Mutanda mine in Democratic Republic of Congo.

Glencore stuck to its full-year expectations for most commodities, including copper and cobalt, but said it would mine 14% less coal because of the continued closure of its Prodeco operation in Colombia and lower output from Australia.

The miner closed some operations in Chad, Peru, Colombia, South Africa and Canada, but most of its larger operations were unscathed by coronavirus disruptions.

In Congo, Glencore said it was on track with the ramp-up of its Katanga copper and cobalt mine.

London-listed shares in Glencore, which were barely changed by 1140 GMT, are down about 25% so far this year, underperforming a 3.5% decline of an index of its peers. (Reporting by Zandi Shabalala; Editing by David Goodman and Mark Potter) 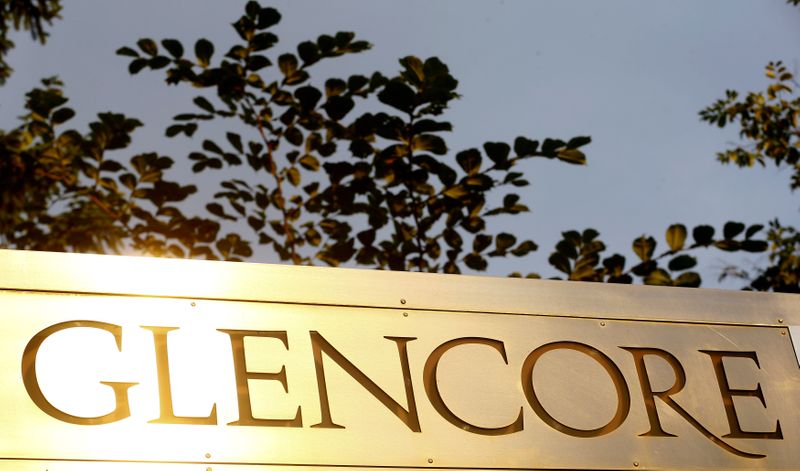 FILE PHOTO: The logo of commodities trader Glencore at its Baar headquarters