ABIDJAN (Reuters) – Rainfall was above average over most of Ivory Coast’s cocoa growing regions last week, increasing the chances of a strong start to the next main crop in October, farmers said on Monday,

Farmers in the world’s biggest cocoa producer said they were happy with the frequency of the downpours, which have encouraged new flowers and cherelles, though they added that some buyers were rejecting mid-crop beans because they were too damp.

Ivory Coast is in the middle of its rainy season and farmers said further sunshine would be important for the development of cherelles and young pods this month.

“Everything’s going well,” said Albert N’Zue, who farms on the fringes of the centre-western region of Daloa, which produces a quarter of Ivory Coast’s national output.

Similar comments were made by farmers in the central regions of Bongouanou and Yamoussoukro.

In the eastern region of Abengourou and in the southern region of Divo, where rains were also above average, farmers said the crop was developing well but sunshine was only average.

They said deliveries of beans for the April-to-September mid-crop were high but several buyers were rejecting beans.

“There are farmers who have had their beans rejected because buyers say they’re too damp,” said Pascal Boka, who farms near Agboville which received 83.2 mm of rain last week, 41 mm above the average.

In the western region of Soubre, rainfall was below average but farmers said the soil moisture content was helping trees.

Temperatures over the past week ranged from 24.4 to 27.7 degrees Celsius. 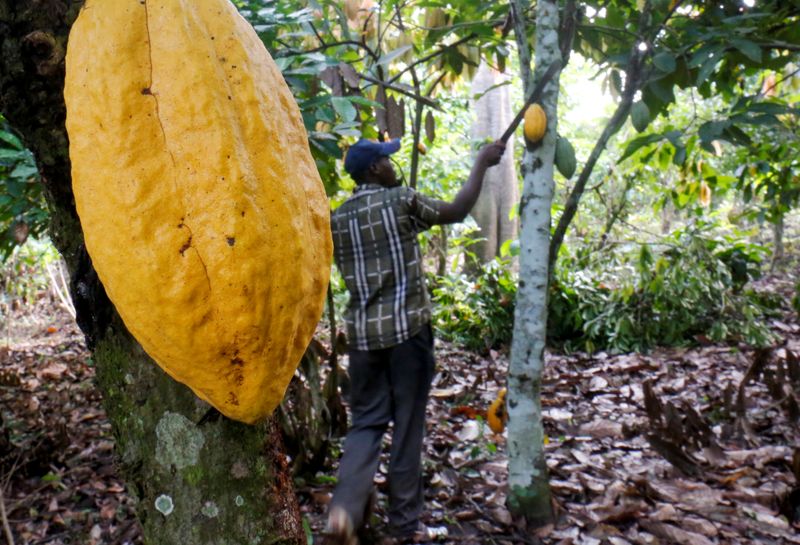 FILE PHOTO: A farmer works in a cocoa farm in Bobia, Gagnoa