CAIRO (Reuters) – Sudanese Prime Minister Abdalla Hamdok said on Tuesday that his country does not have foreign currency to protect the value of the pound and that there is a “structural deficiency.”

The dollar was selling for 100 Sudanese pounds in cash transactions on Monday compared with 88 pounds a week ago, as the gap with the official rate of 45 to the dollar continues to widen.

Hamdok said the dollar was selling for 95 pounds on Tuesday.

The country’s ruling sovereign council and Cabinet agreed the budget in December – the first since the toppling of longtime ruler Omar al-Bashir, whose final years in power were marked by deep economic woes.

The central bank has been printing Sudanese pounds equivalent to $200 million a month to buy and export gold to finance subsidised commodities, mainly fuel and wheat, which has led to “explosive inflation and near freefall of the exchange rate in the parallel market”, the finance ministry said in a 2020 budget statement in December.

Sudan has strategic commodities reserves sufficient for more than a month, he added in a televised interview.

Hamdok also said his government is working on a new central bank law, adding that the central bank should be under the authority of the Cabinet, not the sovereign council.

“Sudan’s bank is one of the legacies of the former regime and has turned into a commercial bank, trading in gold,” he said in an television interview.

“We are working to develop a new law for the Bank of Sudan,” he added, referring to the central bank.

Sudan’s economy was hit hard when the south of the country seceded in 2011, costing it three-quarters of its oil output, a crucial source of foreign currency. 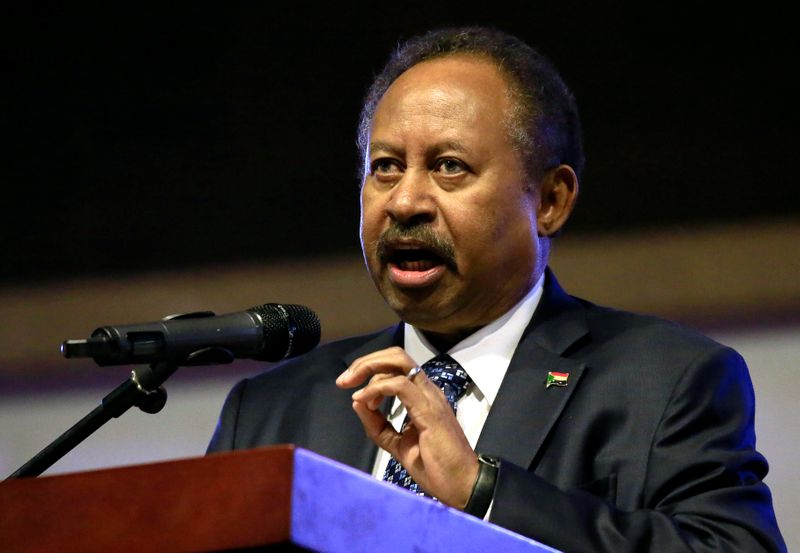 Sudan's Prime Minister in the transitional government Abdalla Hamdok addresses people as they celebrate the first anniversary of the start of the uprising that toppled long-time ruler Omar al-Bashir,