JOHANNESBURG (Reuters) – South Africa’s mining industry body on Monday urged the government to bring on stream new private sector power sources to ease the power crisis that has pushed the country to the brink of recession.

Struggling state-owned utility Eskom was forced to implement power cuts across the country last year and also last week even though many businesses and factories were closed for the holidays.

The power cuts have piled pressure on President Cyril Ramaphosa, who came to power with a pledge to revive investor confidence and boost economic growth.

The Minerals Council South Africa said the insecurity in power supplies plus rapidly increasing costs were at the forefront of the constraints on the economy and mining industry.

The Council said in a statement ahead of a meeting with Ramaphosa and other government leaders: “The government and Eskom should be contracting in, at the least cost possible, any extra renewable energy from existing wind and solar plant that are sitting idle.”

The industry body also said the government should tackle red tape, which is holding up significant additional power that could be brought on stream to bridge the gap.

Last month, mines across South Africa shut down after flash flooding triggered the most severe power blackouts in more than a decade, threatening a key export sector for the country.

The mining industry contributed 351 billion rand ($24.34 billion) to the South African economy in 2018, the Minerals Council has said, equating to about 7% of gross domestic product (GDP).

Eskom supplies more than 90% of South Africa’s power, but its creaking fleet of coal-fired plants have struggled to meet electricity demand.

Executives of the power utility have blamed a lack of critical mid-life maintenance under previous management and analysts say the government needs to procure more generating capacity fast.

Last month, the energy ministry published a document requesting information from the power industry on options for between 2,000 MW and 3,000 MW of new capacity at the lowest cost.

The industry is due to respond by the end of January and present options that could be connected to the grid within three to six months or six to 12 months, if they are selected in a procurement process, the document showed.

“Eskom requires urgent reforms and restructuring to materially improve maintenance, improve plant reliability and to get costs under control,” the Minerals Council said. 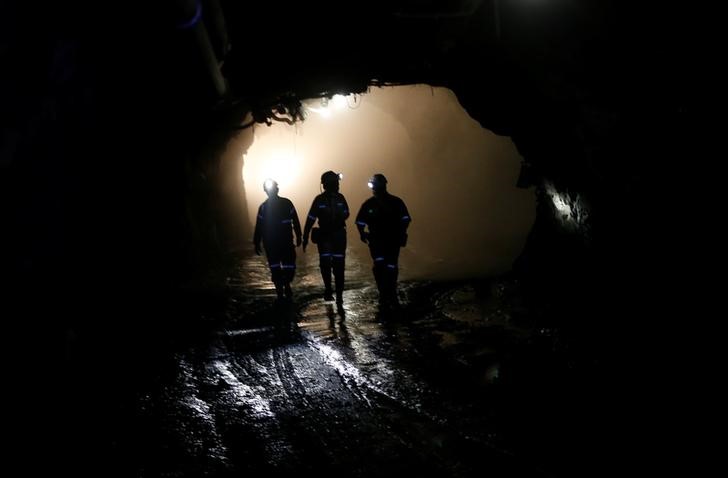 Mine workers are seen under ground at Cullinan mine, near Pretoria, South Africa