* CFO Andrew King to take over as interim CEO

* No disagreement between Oswald and board- source

Mondi, like its peers Smurfit Kappa Group Plc, Sappi Ltd and DS Smith Plc, have suffered from reduced demand for paper, especially newsprint and are increasingly producing more packaging where demand from e-commerce firms is strong.

However, they are also struggling with high fibre costs that are weighing on profits and Mondi’s third-quarter earnings slumped 18% in October, with the firm blaming sluggish demand and softer prices for key paper grades.

CEO Peter Oswald will be replaced by Chief Financial Officer Andrew King on an interim basis. King will take over on March 31 and keep the role until a successor is appointed, the company said on Friday.

The FTSE 100 firm did not disclose the reason for Oswald’s departure.

“The business is in good shape, and there is nothing strange happening in full-year results which will be announced on Feb. 27. There are no disagreements over strategy,” a source close to the matter told Reuters.

“It is just really one of those things that happens where the CEO and board decide to part ways,” the source said.

Shares in Mondi were 2.5% lower at 1,670 pence at 0900 GMT, making them the second biggest loser on London’s bluechip index . The shares underperformed UK sector peers in 2019 with a rise of about 8.5%, compared to double digit gains for Smurfit Kappa and DS Smith.

Oswald joined Mondi in 1992 and took the helm of the 53-year old company in May 2017 after holding a number of senior executive roles within the firm.

Mondi simplified its structure last year from a dual-listed entity to having a primary listing on the London Stock Exchange. Its operations span central Europe, Russia, North America and South Africa.

Finnish paper firm Stora Enso, one of the world’s largest pulp, paper and packaging board makers, said in October that it expected weak demand and prices in the fourth quarter. ($1 = 0.7649 pounds) (Reporting by Shanima A and Noor Zainab Hussian in Bengaluru; Editing by Saumyadeb Chakrabarty and Elaine Hardcastle) 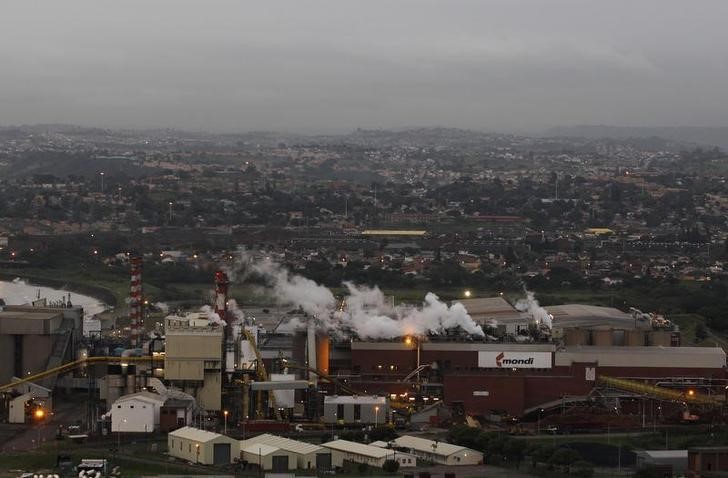 A general view of the Mondi paper factory is seen in Merebank, Durban